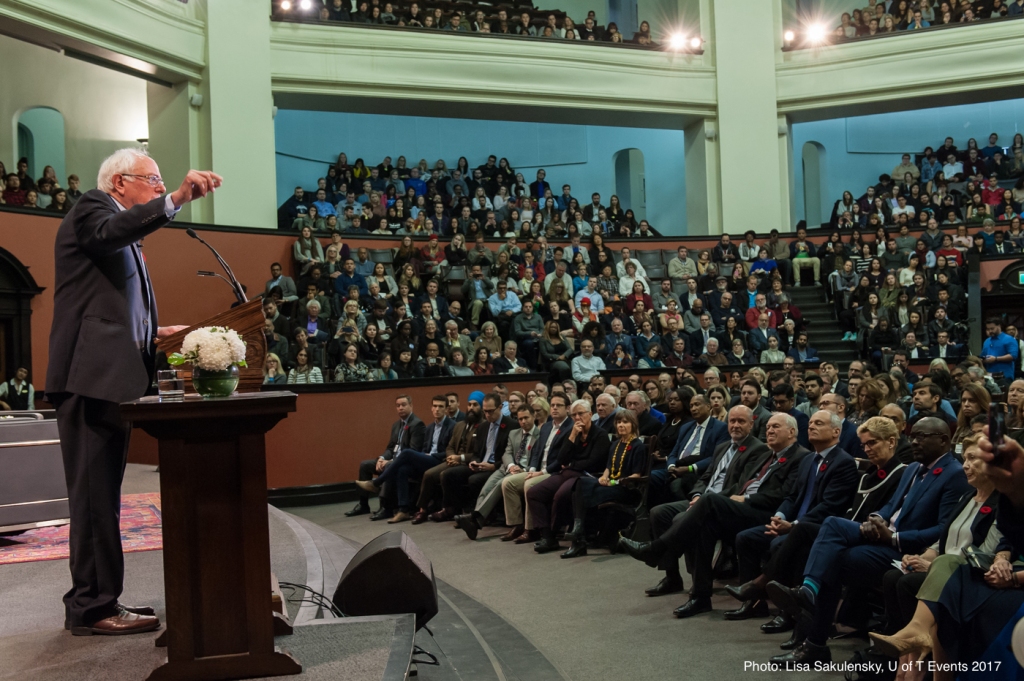 On Sunday, October 29th, 2017, U.S. Senator Bernie Sanders (Vermont) and Dr. Danielle Martin, Associate Professor at the Institute of Health Policy, Management and Evaluation based in the Dalla Lana School of Public Health, met at Convocation Hall to discuss what lies ahead in the fight for a universal health care system in the United States. Unsurprisingly, the event was so popular that registration closed in a matter of seconds. On the day of the event, lines began to form more than three hours before its 11:00 a.m. start time, with some students standing in the rush-ticket line as early as 6:00 a.m.

Sanders visited Toronto to learn directly from the policymakers, health care administrators, and other players involved in the success of Canada’s health care system.

Sanders’ guiding question is simple: “[h]ow does it happen that here in Canada, you provide health care to every man, woman and child and you do it at 50 per cent of the cost [that is spent] on health care in the United States?”

The “What the U.S. can learn from Canadian Health Care” event is one of Sanders’ many efforts to spark discussions on universal health care in the States, in preparation for the upcoming 2020 election.

The event was jointly sponsored by the University of Toronto, Dalla Lana School of Public Health, North American Observatory on Health Systems and Policies, Women’s College Hospital, Broadbent Institute, and the Wellesley Institute, each of which make significant contributions to the improvement and continued success of Canada’s health care system.

Martin has been working with Sanders in his efforts to bring universal health care to the U.S. over the past three years. In 2014, Sanders invited Martin to speak on behalf of Canada’s Medicare system at a U.S. Senate subcommittee hearing on Obamacare, in which she defended Medicare against Sen. Richard Burr, who challenged the Canadian system with sensational opinions, rather than facts.

More recently, in September 2017, Martin stood alongside Sanders and 16 U.S. senators on Capitol Hill, as Sanders introduced his “Medicare for All” bill —  a comprehensive universal health care plan, which exceeds the coverage that Medicare currently provides Canadians with. Under “Medicare for All”, the U.S. would enjoy a single-payer system, whereby all medically necessary services, prescriptions, and equipment would be accessible to all Americans and free at the point of delivery. This bill stands in stark contrast to what presently constitutes the American health care system.

During the event, Sanders made reference to the 29 million Americans who do not have health insurance at all, and the even greater number of Americans who are underinsured, or who have prohibitively high copayments and deductibles.

Sanders highlighted cases in which once-treatable illnesses became unnecessarily terminal due to lack of financial resources and, as a result, the hesitation to seek immediate medical treatment.

In Canada, Medicare’s history can be traced back to 1947. Under the governance of Tommy Douglas, Saskatchewan introduced the Saskatchewan Hospital Services plan and, despite initial criticism and push-back, this model would eventually be adopted across Canada. Douglas’ success, however, depended on the political engagement of and support from individual Canadians.

This kind of change requires a re-defining of our concept of freedom itself. As Sanders described it, freedom should include “… not just the right to vote, but [also] to live in security and dignity with a decent job, decent educational opportunities, healthcare as a right, and […] an environment which is clean and which is not being destroyed by climate change.”

In order to secure this kind of freedom, however, we must direct questions towards the incredibly powerful special interest groups, which currently wield a dangerous amount of influence over the U.S.. Specifically, Sanders referred to the Koch brothers, who currently lead a group of billionaires in the establishment and growth of an extreme right-wing political network. The Koch brothers own the second-largest privately-run business in America, Koch Industries, and are worth nearly $90 billion dollars.

The Koch brothers are, according to Sanders, “more powerful politically in the United States than either the Republican party, or the Democratic party.”

As a result of a Citizens United Supreme Court decision, the Koch brothers and billionaires like them, are able to contribute, as Sanders stated, “hundreds of millions of dollars […] to elect right-wing candidates who represent the interest of the wealthy and the powerful.”  Sanders went on to state that they are also able to “establish think-tanks, they establish chairs at universities throughout the [U.S.], they have significant influence over the media.”

Rather than the public good, the Koch brothers’ agenda is largely centered around the thought “that government should play virtually no role in our lives, perhaps except for defense.” It is an agenda stemming from the idea “that concepts like social security, or public health, or public education, should be scrapped and privatized.”

Sanders emphasized that agendas like these aspire to “move America back to […] the 1920s, when working people had no protection as workers, where the elderly, the children, the sick and the poor had virtually no rights at all, […] to a society where ‘freedom’ was based on the amount of money that you had in your bank account.” This kind of power without limits has resulted in pushing the Republican party, once a centre-right party, towards becoming a “right-wing extremist party,” one which Sanders reminded the audience “voted to throw some 30 million Americans off of the health insurance they currently have by making massive cuts to the health insurance programs and by ending the Affordable Care Act, established by Barack Obama.”

With powers like the Koch brothers and their continual efforts to funnel money into keeping America as is, it is nearly impossible for any one person or politician to take a stand.

On the necessity of political engagement

During the discussion between Martin and Sanders, Martin asked how Sanders could see change being enacted in the States. Sanders noted that “the journey is not easy, and the journey never has been easy for human rights [and] for human dignity.” He went on to describe how America has “[moved] away from democracy, into kleptocracy and oligarchy.” A frightening reality, this means that an increasingly small group of people control the economies and politics of the country.

The journey towards adopting more a equitable social welfare state, which recognizes healthcare as a human right, requires that we “develop strong grassroots [movements and] tell every person, every working person, every young [person], that you are sorely mistaken if you think that politics is not important to your [life].”

“If you want a climate that is liveable, you’ve got to be involved in politics because there are very, very powerful special interests who could care less about the planet. If you want to expand and protect what you have in health care, or in education, there are people out there in every country in the world who think that it is more important to give tax breaks to the richest people in this country than to provide health care or education or economic rights for working people, and what we need to do is take those oligarchs on. That is the fight of the moment.”

The popularity and success of the “What the U.S. can learn from Canadian Health Care” event demonstrates the power of Sanders’ social democratic values and message. As Sanders noted during the event, it is worth learning about powers like the Koch brothers, for these oligarchs work very hard to make a social democratic welfare state appear unachievable. Relentlessly asking questions of these powers, and the challenging the influence that they hold over America is part and parcel in the fight for universal health care in the U.S..

Editor’s Note: Thanks to the University of Toronto’s Dalla Lana School of Public Health for co-organizing this event and for inviting Juxtaposition Global Health Magazine to attend.