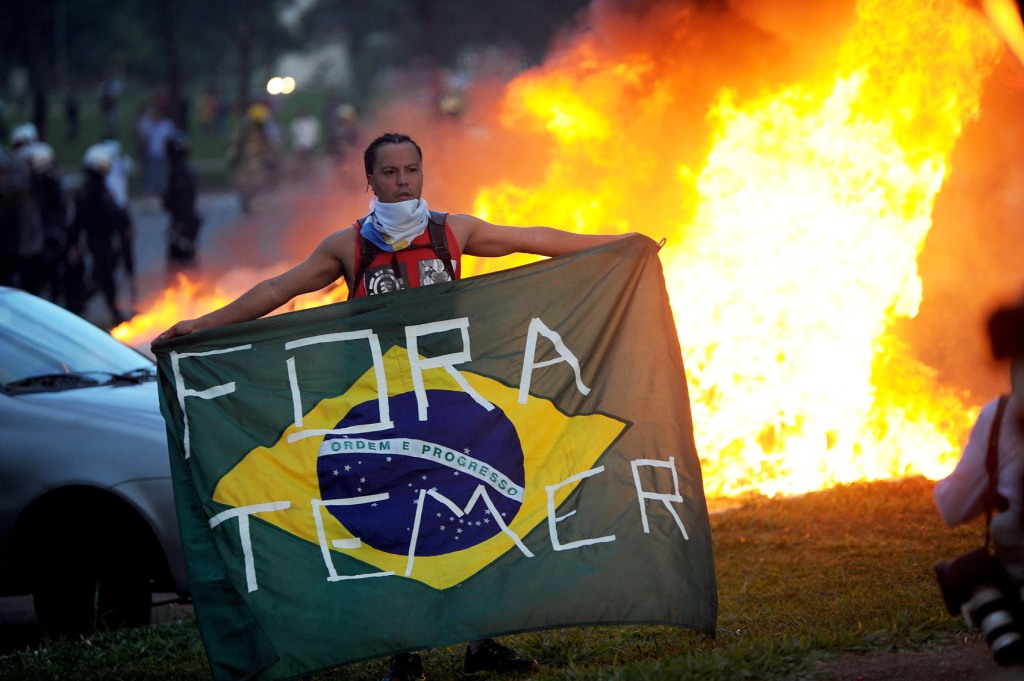 Students protest in front of the Congress in Brasilia against the bill that freezes government spending for 20 years, on November 29, 2016 Brazilian riot police fought an angry crowd of demonstrators outside Congress on Tuesday as lawmakers prepared to vote on austerity measures freezing government spending for 20 years. / AFP PHOTO / ANDRESSA ANHOLETE

It has become cliché to say that 2016 was a bad year. As far as countries go, however, one of the hardest hit by 2016 has to have been Brazil.

First off, there was Zika: a mosquito-borne virus that led to a public health emergency due to the link between the virus and a birth defect known as microcephaly. Brazil alone had over 2300 cases of Zika-linked microcephaly and over 120 000 confirmed cases of Zika. Then, the country descended into economic and political turmoil, which eventually led to a slew of arrests and investigations into the state-owned oil company, Petrobras, as part of a massive colourfully-named investigation called Operation Car Wash. At the same time, Brazil’s government was undergoing a debt crisis, not only due to budgetary mismanagement, but also because of a decrease in resource prices, corruption, and more. Overall, Brazil endured a particularly deep recession and a high rate of unemployment since the beginning of 2015.

Operation Car Wash culminated in the impeachment of President Dilma Rousseff, who, although unpopular, was never accused of more than “budgetary manipulation”, of which she was later cleared. She was replaced by Vice-President Michel Temer, who immediately sought to  undo her socialist policies and bring in an all-white male cabinet. Above all, in November, a plane carrying 81 people, including most of the football team from Chapeco, Brazil, crashed into a mountainside in Colombia, devastating the team, the city, and the country.

Amongst all of these events, the Temer government recently passed a wide-ranging package of constitutional amendments altogether called PEC 55. The amendment seeks to freeze public spending on social programs in real terms for the next 20 years, while increasing only in line with the rate of inflation. This means that expenditures will have to stay at 2016 levels until 2037, with no chance of repeal or amendment for at least ten years. Regardless of population or GDP growth, no future government will have the ability to raise spending. Temer’s government argues that the amendment will bring stability to Brazil’s ballooning public spending and restore market confidence in the government. However, many economists see this as nothing more than an especially strict form of austerity – one which has been implemented by an unelected government and which will deny future elected governments that ability to undo it.

Until now, Brazil has had a lot of innovative and effective programs targeted at the portion of  the population situated below the poverty line: roughly 20%. For example, Bolsa Família is a $7.4 billion USD conditional cash transfer program that reaches almost 50 million people. It requires families to register their children for school,and ensure their regular attendance, while also meeting other important health needs such as vaccination. However, health care, education, housing, and a whole host of other essential social interventions are still far from satisfying the needs of Latin America’s largest economy. Programs of this kind are in need of much more money, rather than the freeze they have received from PEC 55. The impact on education will be immense: according to the UN special rapporteur on extreme poverty and human rights, rather than increasing education spending by $11.6 billion USD, PEC 55 will effectively reduce spending by $14.8 billion over eight years.

It is not hard to understand the deep impact this will have on health for decades to come. Education, housing, access to health services, and other social programs are intimately linked to overall well-being. The ability of poor people to earn a living wage, buy sufficient quantities of food, and access medical services is decimated when the programs they have come to rely on are gutted. Supposing  PEC 55 were to be completely undone in ten years (which is next to impossible), its effects will nonetheless be felt over a lifetime.

There are myriad other arguments against PEC 55 as well. For instance, Temer’s government was unelected, and as such has no mandate to pass a constitutional amendment that will affect millions of people that did not vote for him. There is also the argument – coming from IMF economists, no less – that austerity in a time of recession is ineffective at stimulating the economy, especially an economy like Brazil’s where so much of the workforce is in destitution.

However, the first argument needs to be the human cost. Regardless of the implications on  investor confidence or the reputation of Brazil’s finance minister, Henrique Meirelles, as he walked the halls of the Davos World Economic Forum, the government has no right to place all the costs of their mismanagement and corruption on the people of Brazil. PEC 55 was approved by the senate on December 13, 2016. If nothing happens to somehow undo the worst of the planned cuts to Brazil’s social programming, then 2016 will only be the beginning of the misery for Brazil’s condemned generation.